Arthur Sack was a farmer who enjoyed constructing aero-models.

In June 1939 in Leipzig-Mockau he attended the First National Contest of Aero-models with Combustion Engines, where he hand-launched his first aero model with a circular wing, the AS-1. It possessed rather poor flying qualities. Arthur Sack's aeromodel measured 125 cm and weighed just 4.5 kg, powered by a Kratmo-30 motor of 0.65 V and 4,500 RPM with a propeller measuring 600 mm in diameter. His circular aircraft was unable to lift off the ground by itself, and finally Sack had to throw it into the air in desperation. After this assisted takeoff , the model managed to perform 100 meters of stable flight, just barely reaching the finish line.

However, the odd-shaped model instantly caught the attention of Air Minister General Udet who was fascinated by the circular shape and gave Sack permission to proceed with his research with official backing. Sack immediately began construction of A.S. aero models of increasing size up to the A.S.5 which was by far the largest flying model. With a wingspan of 125 cm, length of 159 cm, and height of 65.3 cm the two-bladed propeller model took to the air and proved the soundness of the basic design.

From this point on Sack was determined to build a manned machine that would become the Arthur Sack A.S.6V-1.

The aircraft was built in Leipzig starting in January 1944 in the workshops of the Mitteldeutsche Motorwerke company. Assembly and final tuning were performed at the Flugplatz-Werkstatt workshop at Brandis air base during the same month.

The basic structure was made of plywood while the cockpit, pilot seat, and landing gear all came from an old wrecked Me Bf 109B. The engine was taken from a Me Bf 108 Taifun, an Argus As 10C-3 of 240 hp working on an old wooden two-blade propeller.

In February 1944, the A.S.6V-1 taxi test started, piloted by Baltabol from the ATG/DFW of . The first test proved that the rudder was not strong enough and some structural damage resulted from the test.

During the second test five separate take-off runs were attempted from the 1,200 meter landing strip at Brandis. It was soon discovered that the control surfaces failed to function properly because they were positioned in the vacuum area produced by the circular wing while taxiing. The right leg of the landing gear was damaged on the last run.

Due to war restrictions more powerful engines than the low-hp Argus were not available so the incidence angle was increased. The test pilot at this point proposed moving the landing gear back 20 cm, but due to structural reasons that could not be overcome, the modification was deemed too risky. Instead, brakes were installed from a Ju-88, 70 kg of ballast was added ahead of wing spar No.3 and the tail surfaces were increased by adding 20mm of corrugated plates.

The third test flight was performed over the 700 meter strip at Brandis on April 16, 1944. There was no wind and the plane rolled 500 meters without lifting its tail. No aerodynamic control of the empennages was achieved. The plane made a brief hop but could not get into the air.

During the fourth flight test the jump was a bit longer; however, the plane banked to the left because of torsion generated by the propeller, this being very difficult to balance in a small wingspan aircraft.

After this Baltabol lost all hope and recommended the installation of a proper Daimler-Benz engine from a current Me Bf 109 and a complete study of the basic design in an aerodynamic wind tunnel. Sack went on trying to solve the problem by himself in the traditional manner until the end of the war.

The A.S.6V-1 would have sat for the duration had it not been for the arrival of Gruppe I/JG400 at Brandis in the summer of 1944. These were the confident new Me-163 Komet pilots who had plenty of experience with difficult take-offs and landings with short wingspan aircraft. So, it was inevitable that one of them, Oberleutnant Franz Roszle, made an attempt to fly what the Gruppe named the "Bierdeckel" (Beer tray)!

His attempt, like Baltabol before him, ended with a short hop and collapsed landing gear. The Komet pilot made the same suggestion to Sack about testing the design in a wind tunnel and then turning the aircraft over to Messerschmitt for proper redesign with components of the latest Me Bf 109 fighter, including armaments. Sack refused to listen or ask any favors from the RLM. Messerschmitt got word of the A.S.6V-1 and actually proposed that a new A.S.7V-1 should be re-designated as Me-600.

The proposed Me-600 would have enlarged the circular wing considerably and featured a complete fuselage with the latest DB 605 ASCM/DCM of 2,000 hp with MW injection and a four-bladed propeller, repositioned gear, improved control surfaces, redesigned tail unit, Galland hood, and six MK-108 cannon buried in the reinforced circular wing! With wind tunnel data corrections and Messerschmitt construction the projected Me-600 would have been a formidable 500 mph fighter.

The odd circular wing already had the Komet pilots making suggestions for a new nickname. They would call any Sack aircraft that made it into combat the "Bussard" (Buzzard)! The name was proposed by the nature of the A.S.6V-1 which didn't fly much but spent a lot of time on the ground and made out of "scavenged" parts!

But Sack never got the chance to fix the A.S.6V-1 as it was strafed one day and then cut up and dismantled before

troops arrived at Brandis in April 1945. They found no trace of the aircraft. 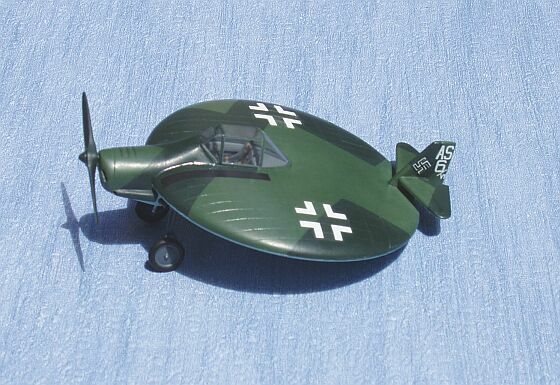 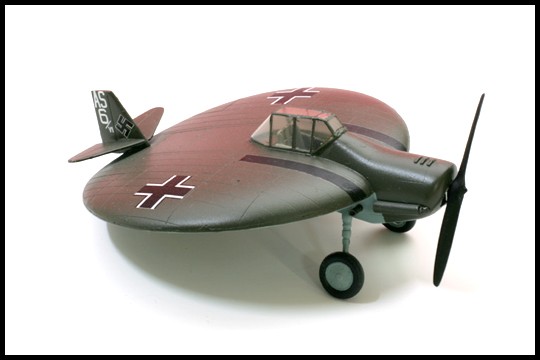