Henri Coanda, a Rumanian aeronautical engineer born in 1886, was living in Paris at the turn of the century. By 1910, Coanda had built the world's first designed jet aircraft - the bi-plane "Turbine Aeroplane" which was displayed during an exposition in Paris.

By 1910, Coanda had built the world's first designed jet aircraft - the bi-plane "Turbine Aeroplane" which was displayed during an exposition in Paris.

Coanda, however, missed his critical historic claim to fame while toying with the aircraft's primitive water-cooled 50 hp four-cylinder Clerget motor-driven thermal jet turbine which Coanda called a "Air-Reaction Engine". The motor was connected to a gearbox and then to a compressor which rotated at 4,000 rpm. At the front of the aircraft a huge "Obturator" controlled the amount of air entering the compressor. From the compressor the air then went to the "burning room" combustion chambers located on each side of the fuselage where the engine exhaust was mixed with fuel and ignited, creating very hot expansion of the exhaust which exited through tubes and down the steel-plated sides of the bi-plane producing thrust.

While making slight adjustments while the engine warmed up the thermal jet started the aircraft rolling forward. Not being a pilot, Coanda jumped into the jet aircraft anyway and attempted to fly it. He failed and crashed, being ejected from the aircraft in the process.

Another Turbine Aeroplane was not attempted. However, Coanda noticed that the flames from the engine exhausts went around the protective plates and converged again on the fuselage. This led to Coanda's famous physical phenomenon discovery that when a liquid moves at high speed near a curved surface, it adapts itself to that curvature. This also applies to air, but the flow speed must be much higher for effectiveness. It is a "suction" effect. Thus, the "Coanda Effect" was discovered and Coanda himself quickly experimented with it before filing for three new propulsion patents in 1938.

Despite this remarkable idea, no official interest came of it until the German occupation of in 1940. The SS immediately brought Coanda in and put him to work on designing a large disc to be powered by the latest in German jet engine technology.

Coanda for his part designed a strange lenticular disc with a diameter of 20 meters. It was to utilize twelve Jumo 004B jet engines installed in a radial pattern on its periphery with jet nozzles that forked into three exhaust pipes directed towards the thick external ring. Once lift was achieved, accelerating the engines on one side would cause the other side to go downwards and the craft followed that direction.

While Coanda's design was a masterpiece of jet disc technology, only scale model wind tunnel testing was performed by the end of the war. Such a machine would not be practical due to the large number of jet engines required - vital engines that the Me-262 Schwalbe and Ar 34 Blitz desperately needed.

The large machine would have also consumed large amounts of aviation fuel of which Germany was critically short of by 1944. So, Coanda did further research into smaller-scale aerodynes while the Reich crumbled around him. 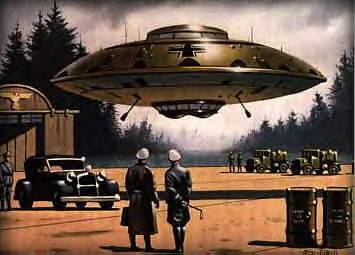 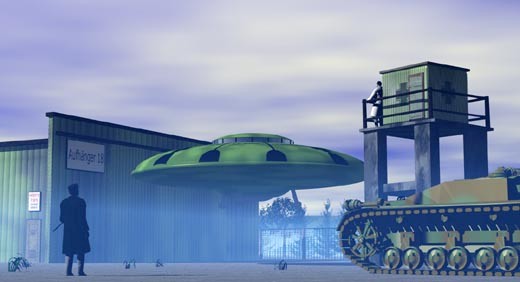 Postwar, however, Coanda's work was validated by scientists of the Allied research services which declared his propulsion system suitable in 1949. The Cornell Aeronautical Laboratory in the during 1952 further added to Coanda's credibility when tests performed using his propulsion system came back with positive results.

Coanda subsequently filed new patents in the 1960s for disc aircraft and propulsion systems, but none of his craft were ever constructed... or were they? 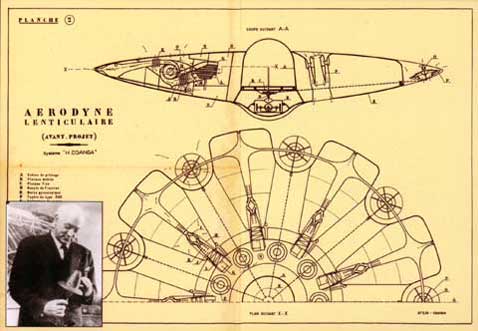