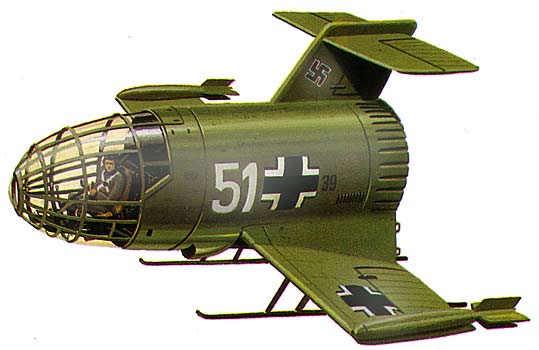 When the Reichsministry of Sportive and Jolly Activities issued its edict banning unauthorized use of fireworks in April 1945, it triggered creation of one of Nazidom's last violent flying death throes: the potentially vicious Dinkel "Little Fireworks Weapon.' The Dinkel was merely a metal tube, its fat nether end hollowed out and stuffed with every skyrocket, cherry bomb, Roman candle and other explosive that could be culled from warehouses, private homes and factories. The pilot hung on for dear life as someone lit the wick protruding from the stern. The craft wiggled and shot ahead on skids, rising into the air if the pilot was quick-witted enough to so direct its erratic course.

Few Dinkels saw active service, but in the last great sentimental gesture of the Hitler era, Reichsmarshall Hermann Göring had four such craft assembled, ordered them fueled with fireworks, and then, as his Führer watched, had the Dinkels fly overhead skywriting a multicolored Swastika in the night sky. Alas, the Swastika proved a skywriter's Götterdämmerung when all four planes collided at the axis. The Führer was nonetheless said to be delighted at the show. A repeat gala featuring 60 GX's was scheduled for the next August, but was canceled by the unexpected turn of events that May.