Italian turbine engineer Giuseppe Belluzzo (1875-1952) was one of three specialists brought in by the SS to work on Rudolf Schriever’s original Flugkreisel (Flying Gyro) disc-fan concept which was built and test flown sometime in 1943.

While the Schriever disc-fan concept worked the prototype was unstable and like the smaller-scale BMW Flügelrad (Winged Wheel) series of disc-fans was prone to instability problems. Unlike the Flügelrads, however, Schriever’s disc fan was much more powerful with a larger disc rotor and five kerosene burning jet engines that roared tremendously.

Although it had the ability for VTOL, the SS were not satisfied and called in Dr. Richard Miethe, Klaus Habermohl, Giuseppe Belluzo, and six other engineers to propose alternative designs that would improve Schriever’s Flugkreisel performance or replace it with a totally new design. Habermohl proposed another disc-fan with a Walterrohr (Walter Rocket Pipe) deflector very similar to the Flügelrad scheme but on a larger scale. This design was rejected. Dr. Miethe proposed an advanced bulbous jet design that has been misidentified as the mysterious V-7 weapon for decades. This design, however promising, was not built and the V-7 was actually a separate Miethe design that might have been built - the Elektrische Luft Turbine which burned air and nitrogen.  Instead, Viktor Schauberger’s improved Repulsin B discoid motor had been perfected by 1944 and Miethe proposed a larger manned prototype constructed in Breslau that relegated Schriever’s disc fan to the scrap heap if not for the intervention of BMW’s Prag-Kbely facility for further aerodynamic study.

Miethe’s version flew in 1944 over the Baltic and was a success. So, what of Giuseppe Belluzzo’s contribution? It has been claimed that Belluzzo had proposed a design as a collaboration with both Miethe and Schriever but in reality the design always depicted is Coanda’s Lenticular Disc which had nothing to do with Belluzzo or anyone else.

What Giuseppe Belluzo worked on was a circular disc called the Turboproietti (or Turbina Proiettile, Turbine Projectile). This was to serve as a form of “Fliegende Artillerie” (Flying Artillery) that would be launched over enemy positions and like the V-1 missile run out of fuel and drop directly over the target. A further research project study concluded that the Turboproietti might also serve as an aerial Flakmine, detonating in the midst of Allied bomber streams.

Certainly, Belluzo had the turbine experience to design such a machine. As early as 1907 he had designed what was to become a series of turbine locomotives. The first was Belluzzo’s quadruple turbine engine of 1907 which mounted four turbine engines with reduction gearing onto the four locomotive wheels. But due to suspected inadequate reduction ratio no details were ever released on this project. Not to be deterred, Belluzzo and Breda came up with another Turbine Locomotive in 1931 - a rather complicated machine with four turbines (one high pressure, one medium pressure, and two low pressure) built by Ernesto Breda. It was tested at the Breda Works in but not on the main line, suggesting another failure. Still, Belluzo did not give up. In 1933, with help from the Italian State Railways another turbine locomotive was built in and ran a rail journey from to . It was never heard of again, so success seemed to elude engineer Belluzzo.

But working with the SS, Belluzzo designed a three motor jet pipe system that would rotate an annular wing. Belluzo had been inspired by Hermann Oberth’s orbital platform concepts since the 1930’s so he put his own engineering skill to work with this design. Here is a brief description of the design:

Jet pipes on the edge of the disc had a variable diameter. A turbine drove the pipes initially until air accelerated through the pipes. At the widest section of each pipe oil was injected and ignited. The temperature was raised quickly and at the end of each underside pipe the air reached a speed of  700 meters/second, able to allow the circular craft to spin at a rotation speed of 400 meters/second. When the fuel ran out , the explosive-laden Turboproietti simply dropped to the ground in similar fashion to the German V-1 missile. Hopefully, the target would receive a direct hit.

While the SS entertained the idea of this operation, an unmanned aerial Flakmine version was considered more important and that was what Giuseppe Belluzzo was working on in 1945 when the war ended. No prototypes were ever constructed and this design should in no way be identified with the WNF Feuerball which was built at Wiener Neustadt and carried an electrostatic weapon developed at Messerschmitt’s facilty. It could, however, be the reference to the SS Schildkröte (turtle) name. In the First World War German soldiers used a variety of grenades and among them was a disk grenade nicknamed the Schildkröte. Belluzzo’s Turbo Proietti fits a similar profile of an explosive disc “thrown” at the enemy but in this case it would be an aerial Flakmine “launched” against the bomber streams. 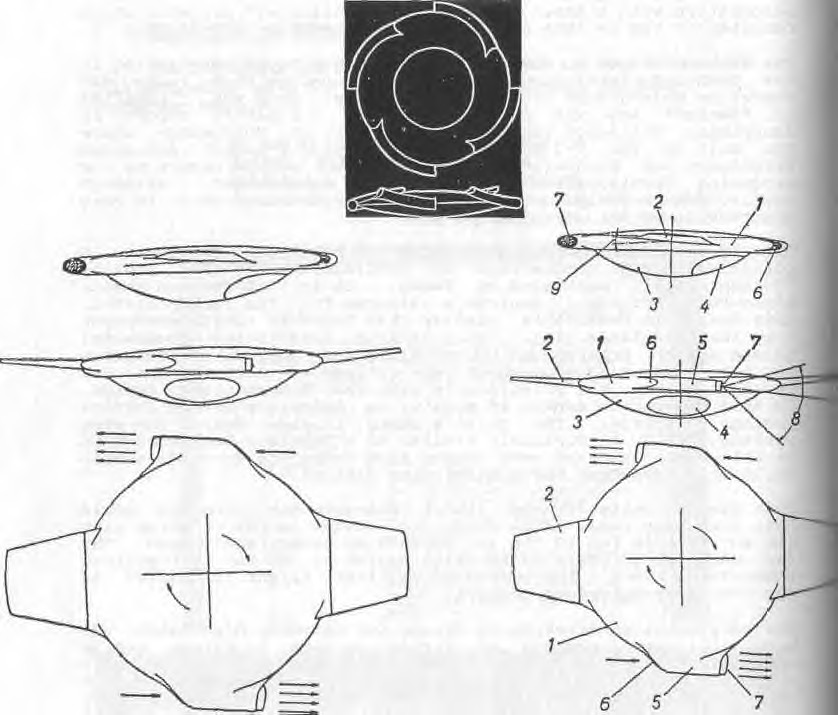