the occult and Vril Gesellschaften (Societies) set about to create an inter-dimensional flight machine based upon channeled information received by their two mediums (Maria Orsic and Sigrun) from the Aldebaran system in the Taurus Constellation, 64 light years away. 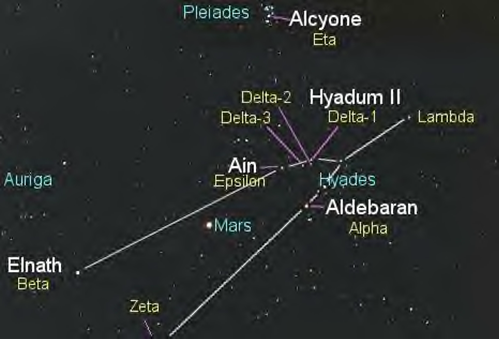 Location in the heavens of Aldebaran, the “Bull’s Eye” of Alpha Tauri

Maria, the Thule medium, had been receiving information from what she believed were Aryan aliens living on a planet in the Aldebaran system since 1919 but could not translate their language and strange mental images.

Sigrun, the Vril medium was brought in to help translate these communications and images which were in the form of the ancient Sumerian language and a strong mental image of a strange circular flight machine with an even stranger cylindrical power plant beyond all conventional science of the time. 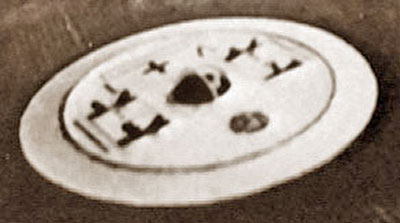 Thule and Vril secretly called this craft the Jenseitsflugmaschine, or "Other World Flight Machine". The Gesellschafts then used their members in the German business community to raise funds for the construction of this machine under the code letters J-F-M. By 1922, parts for the machine began arriving independently from various industrial sources paid in full by the Thule and Vril Gesellschaften

The machine itself was in disc form with three inner disc plates inside its plate-like hull and a cylindrical power unit running through the center of all three plates. The central disc plate measured 8 meters in diameter; above it in parallel was a disc plate of 6.5 meters diameter and below an equally parallel disc of 7 meters diameter. Through the center of all three disc plates ran a 2.4 meter high cylindrical power unit that fit into a running 1.8 meter hole that culminated at the bottom of the disc body at a conical point to which was attached an enormous weighted pendulum to stabilize the equipment once the unit was operating.


JFM Powerplant
Once activated, the cylindrical power unit, which consisted of an electric starter motor and high power generator, started the upper and lower disc plates equipped with electromagnets spinning in opposite directions to create strong rotating electromagnetic fields that were increasingly field-intensified. The intensity of the electromagnetic fields were manipulated to create frequency field oscillations that increased in theory up to a point where an inter-dimensional oscillation occurred - a “channel” which opened a “gateway” or portal to another universal system or world. The occultists called this a "white hole" that theoretically would connect the JFM to Aldebaran's corresponding frequency oscillations and navigate the machine through to that system to meet up with the Sumerian Fleet (an alien fleet awaiting them).

The sole purpose of this machine was to reach Aldebaran and make contact directly with those Aryan aliens that had supplied the technical information through psychic revelation. Unlike an imploding black hole that uses its destructive gravitic force to theoretically punch a hole through the fabric of space/time, the occultists believed in non-destructive manipulation of gravity through high-intensity field oscillations to gradually open a small channel in space/time just wide enough to pass the JFM through.

Two years of channeled flight research was performed with the JFM until 1924 when the machine was hurriedly dismantled and moved to Augsburg where it eventually was placed in storage at Messerschmitt's facility. With the end of the war, no trace was ever found of the JFM. Perhaps it was destroyed in an Allied bombing raid or simply taken apart by the Germans themselves out of fear. No one is certain, but recent information indicates that the strange disc may have been moved further north to Peenemünde for scientific investigation and reassembly.

The JFM has been inaccurately described as the “von Braun Disc” in many foreign references. Von Braun for his part never mentioned any disc aircraft at Peenemünde “officially”, but due to US well treatment and future citizenship for him and his rocket team (potential war criminals) it would not have been a wise move on his part. He kept his silence and was rewarded. Yet Peenemünde was always envisioned as a space port from its inception.

Swedish newspaper "Aftonbladet", dated 10/10/52 It describes a German saucer built by Wernher von Braun at Peenemünde, six meters in diameter, which lifted off in April, 1944.
The article states that high fuel consumption was the major problem, a problem which would be solved utilizing atomic power

Whether or not the JFM actually worked, one thing is certain - the Thule and Vril Gesellschafts, with the help of Professor Winfried Otto Schumann of the Technical University of Munich, developed some form of levitator unit from it that would be utilized in further German disc aircraft starting with the RFZ (Rundflugzeug) types in 1937 and ending with the fantastic Haunebu and Vril discs of 1939-1945

Artistic Interpretations of the JFM