The origin of this Kayaba private design began in 1937 with the Kayaba Ramjet Study Group who had been seeking to develop and produce a ramjet engine. In comparison to the pulse-jet engine which injects fuel into the thrust chamber for ignition at specific intervals, as demonstrated by the German V-1 missile, the ramjet maintains a constant flow of fuel, thereby producing constant thrust. While the Germans perfected both the pulse-jet and axial-flow turbojet, the result of the Kayaba team research was the Kayaba Model 1 ramjet.

Due to heavy technology transfer between and in aerial weapons such as the Me 262 and Me 163, Japanese aircraft manufacturers directly produced close copies of these aircraft based upon data received via U-boat. But there is speculation that another design, the Heinkel P.1078C, was delivered to the Japanese as well due to the similarity to the Katsoudori. No known specific date was given for the Katsoudori design on paper, but is believed to have been started in the middle of the war, just prior to the Kikka and Shusui. The He P.1078C originated in early 1944. It is possible that the Japanese adapted the Katsoudori’s ramjet aircraft around the German design once it had become known. The similarities are striking.

Japanese produced Nakajima Kikka based on the Me-262

The need for a late-war rocket-powered interceptor seen in the Mitsubishi J8M1 Shusui was taken another step with the conceived use of ramjets in the Kayaba diminutive fighter design. The tailless plane would use four 3,600 lb. thrust solid rocket boosters to accelerate the aircraft to the required 149 mph airflow in order to switch on the Kayaba ramjet. In this case, a Kayaba Model 1 or latter model ramjet producing an initial 661lbs. of thrust was to be employed. After taking off using a wheeled dolly like the Me 163, the RATO boosters would be fired in pairs for 5 seconds each and then jettisoned after the ramjet fired up. A belly skid, similar to the Me 163, was to be used for an un-powered landing at a safe and stable 62 mph. Due to the use of standard aviation fuel, the Katsoudori pilot need not fear a catastrophic explosion of volatile rocket fuels found with the Me-163. 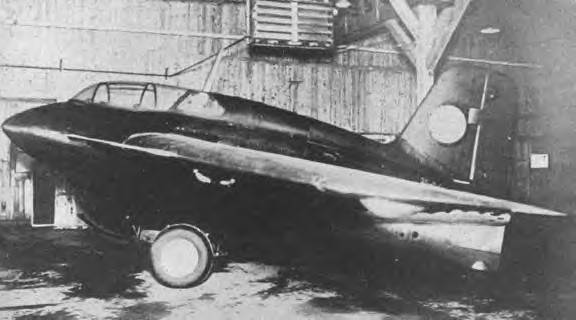 And with a total fuel reserve of 3,306 lbs. the Katsoudori had an estimated thirty minute combat flight duration. However, fate intervened with the arrival of the German technology. The Katsoudori project was shelved when the Me 163-based rocket-powered designs were born, due to the fact that the 163 was already a flight-proven design and the Katsoudori was not. There was no time to further develop the Kayaba ramjet and perform flight testing on an untried aircraft.

The Katsoudori would have had a projected 559 mph top speed with a climb to 32,808 feet in 3-minutes. This was much slower than the Me 163’s phenomenal climb of 16,000 fpm, but an acceptable range of 248 miles was expected during the thirty minutes of powered flight. A top ceiling of 49,212 feet would have enabled the Katsoudori to intercept any plane in 1945, including the formidable B-29 Superfortress plaguing the home islands.

The wing span was exactly the same as the He P.1078C, but the sweep was 35.5 degrees compared to 40degrees for the Heinkel. The Katsoudori was shorter by five feet also but also much lighter at 1,873 lbs. empty and 6,613 lbs. loaded. Armament would have consisted of two 30 mm Type 5 cannon with 45 rounds per gun.

A truly remarkable original Japanese design that defied the traditional constraints of the times, its ultimate downfall was the flood of German aviation technology transferred to as the Reich crumbled and the Japanese inability to produce working and efficient independent jet designs.

And since this was a private Kayaba venture, it is never found included with IJA & IJN project aircraft. 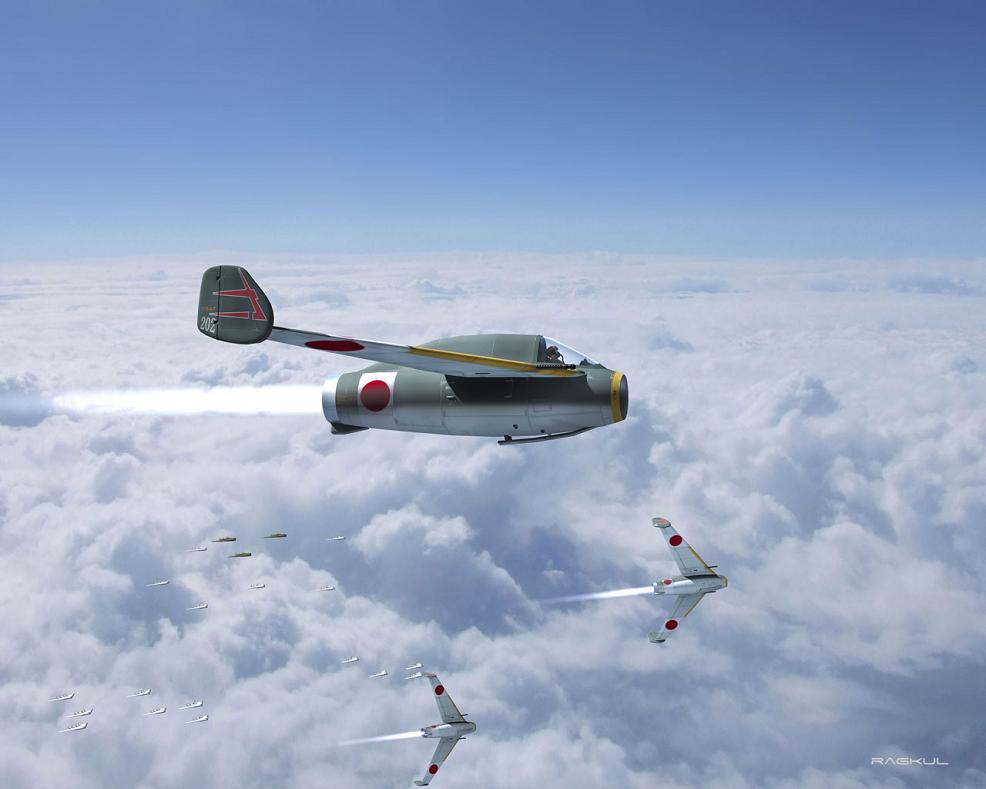