After the First World War Michel Wibault founded the “Societe des Avions Michel Wibault“  (S.A. Wibault) near . He designed several fighter and transport aircraft out of Duraluminium, most of which were monoplanes instead of biplanes which were still a common sight in the 1920s to early 1940s.

In 1922 Wibault became a consultant for the British Vickers aircraft company. He apparently maintained links to this English aircraft company over the years but during the Second World War Wibault emigrated to the and worked in the aviation industry; many different companies including Republic Aviation.

The chief engineer of Republic Aviation back then was Alexander Kartveli, born in the Soviet Republic of Georgia. Kartveli obtained an engineering degree in and had worked for several French companies, including S.A. Wibault, before he emigrated to the in the late 1920s.

There is little information about exactly what Michel Wibault DID during the 1945-55 period working for several aviation companies, but at least one of his peculiar aircraft designs from 1948 is known. A strange rear-pusher aircraft!

the French engineer Michel Wibault, assignor to the Vibrane Corporation, filed the U.S.-Patent-No. 2,807,428. The Patent was granted September 24, 1957 and was described as an “Aircraft with Enclosed Rotor“. A circular disc craft. He called it a “Gyropter”.

There is speculation that Wibault’s French occupied aircraft company S.A. Wibault had built during World War II a similar “saucer aircraft” (a soucoupe) under Nazi supervision which was called the “Gyroter” by 1944.

The circular shaped “Gyroter” probably went to Germany up to Peenemünde (where Fleissner‘s Düsenscheibe was being constructed), but might also have been experimented with at BMW’s Prague facility (where the Flügelrads and Schriever's Flugkreisel were testing) or maybe the Wiener-Neustadter Flugzeugwerke (which was producing the WNF Feuerball “Foo Fighter“); and quite possibly, all three of them.

The “Gyroter” in concept was very similar to Heinrich Focke’s Schnellflugzeug Rochen VTOL turbo shaft circular aircraft with central lift fan housed in a circular airframe and the Epp Omega Diskus ramjet-rotor disc with eight lift fans… only the “Gyroter” would be a French VTOL design with unknown capabilities.

No photo has emerged of this craft but in 1944 the French witnessed another claimed S.A. Wibault aircraft near . Here is a recount of the sightings from a German soldier:

At the end of May, beginning June 1944 I was posted in the area of the French channel coast at a V-1 base southeast of Lisieux near   in . Here I have seen some days after the Allied invasion at a single day two times an unknown rocket fighter coming in from easterly direction (Paris), flying to the front line (Caen) in approximately 500 meters altitude. At first I noticed the aircraft from far distances because of its prominent exhaust stream and its unusual noise. The speed was not very fast.

Some days later a British "Mosquito" "wooden wonder" bomber or reconnaissance aircraft circled above Lisieux, as from the same direction () the rocket fighter appeared again. I could observe that the Mosquito tried to get behind the rocket aircraft, but its pilot noticed the maneuver and suddenly, the mystery fighter accelerated and vanished in the direction of .

Again some days later at , the sky was at this time without any clouds, from the same direction the rocket craft showed up again. The speed was remarkably low and because the craft has flown so low I could see the face of the pilot, who seemed to watch our position.

This time I could see some more details: a delta-shaped flying wing.

During the fly-past of the aircraft I could see a tube like nozzle with a strong exhaust jet.

No one knows what the strange rocket fighter was but it was NOT identified by the German soldier as a Me-163 Komet. 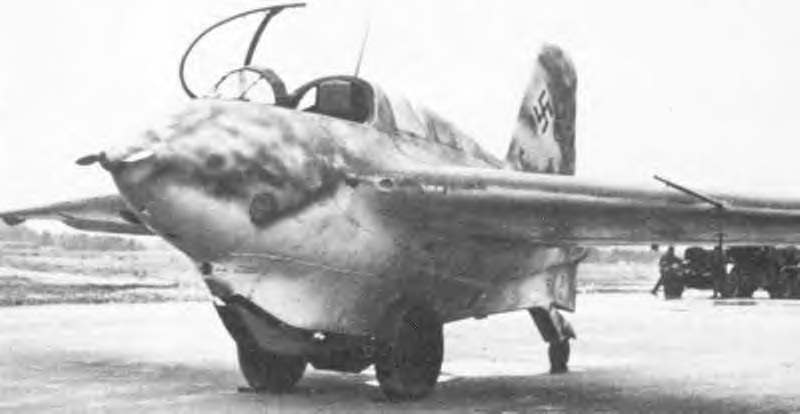 The Komet was a rocket interceptor with an incredible speed of 600 mph and a climb of 16,000 fpm up to the bomber streams that flew between 20-30,000 ft.  It had only an 8-15 minute duration and then had to glide back to base, landing on a belly skid.

The mystery Wibault delta rocket by comparison flew low and slow with a protruding rocket pipe which the Me-163 did not possess. It obviously was an experimental one-of-a-kind aircraft like the “Gyroter”.

But in summer 1953 he suddenly amd unexpectedly filed a patent under the name “Vibrane Corporation“ for a “Gyropter“ disc aircraft.

Meanwhile, Look magazine published in the 1950s a drawing of a circular impeller aircraft designed by Republic Aircraft where Wibault had worked in complete secrecy.

It is speculated that Michel Wibault was involved in this disc design. But had Wibault and Republic Aviation still maintained contact with the German engineers who were involved in further developing Wibault´s Gyroter craft during WWII?

The Republic saucer could have been a competitor to the Avro designs by John Frost (not the Avrocar), but nothing further is known about it. 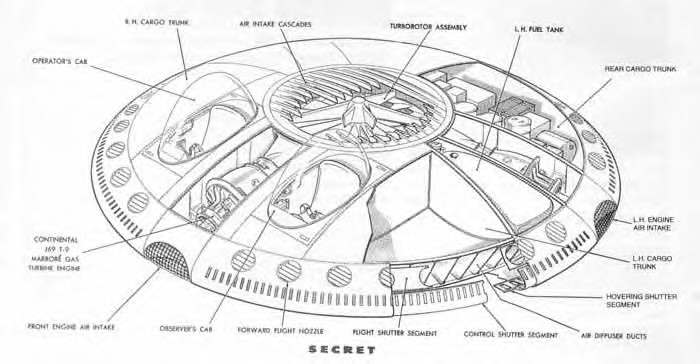 By 1956, however, Michel Wibault, well-known for his pre-WW II designs (and probably his secret disc work), proposed a VTOL aircraft named the "Gyroptere". He was interested in building a combat aircraft that would be able to operate independently of airfields, which were clearly vulnerable to immediate destruction by Soviet nuclear strikes on the event of a general European war.
The Gyroptere was to be fitted with a British Bristol "BE.25 Orion" turboshaft engine, with 8,000 horsepower, fitted in the rear fuselage to drive four blower units, two on each side of the aircraft and arranged around the center of gravity. Each blower would be in a moveable snail-shaped casing that could be rotated to provide vertical or horizontal thrust.
Wibault tried to promote the Gyroptere with both the French and American air forces and got nowhere. Finally, he approached the Paris-based "Mutual Weapons Development Program (MWDP)", an American-funded NATO office that promoted technologies useful for European defense. The MWDP's chief, US Air Force Colonel John Driscoll, found the concept interesting, and passed it back to the NATO "Advisory Group For Aeronautical Research & Development (AGARD)" for comment. 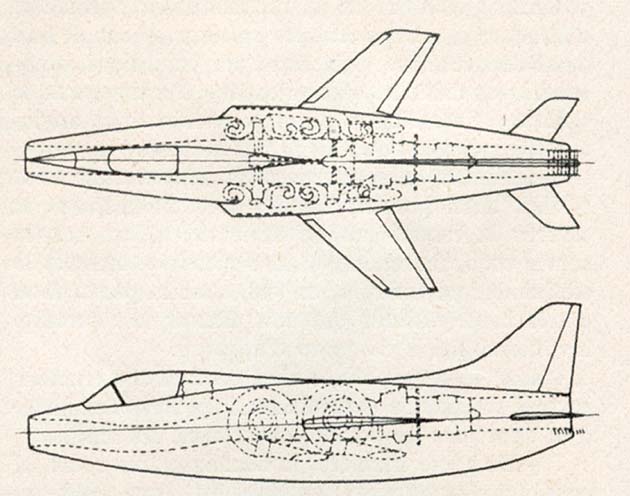 AGARD's chairman was Theodore von Karman of the California Institute of Technology, and one of the most prestigious figures in aerospace. Von Karman was very intrigued by the idea. Encouraged, Colonel Driscoll then passed the concept on to Bristol Aero Engines back in the .
's technical director, Sir Stanley Hooker, found Wibault's design clumsy and inefficient, but he liked the basic idea of using a single engine for both vertical lift and forward flight. Other VTOL experiments at the time had separate sets of engines for the two purposes. Hooker assigned a small research team consisting of Gordon Lewis, Pierre Young, and Neville Quinn to investigate the idea further.
The research team quickly concluded that Wibault's idea could be greatly improved by using the airflow of the engine itself, directed through swiveling exhausts, instead of a set of external blowers. They then gradually refined the idea going through three different engine proposals ranging from the BE.48 to the final BE.53 which was patented as a new type of engine.
Hooker took the BE.53 concept to to show it to Driscoll and von Karman, who were both enthusiastic. Driscoll left the MWDP soon after Hooker's visit, but his successor, USAF Colonel Willis "Bill" Chapman, was just as enthusiastic.
Hooker also hired Michel Wibault as a consultant. Wibault, far from being offended at the way the British were reworking his design concept, was delighted at their ingenuity. He and Gordon Lewis became joint patent holders for the BE.53, though sadly Michel Wibault died just a few weeks later and never saw his idea become reality.
FROM GYROPTERE TO HARRIER
The VTOL design had the company designation P.1127. It was a funny-looking little aircraft, and indeed nothing that resembled this initial concept would ever fly. The BE.53 was fitted under the fuselage, the three (later two) crew sat in a bulbous canopy with its leading edge on the nose of the aircraft, and straight wings. In hindsight, it looked very much like one of the strange "Luftwaffe 1946" concepts the Germans had designed near the end of World War II.


From progressive early conventional monoplane aircraft designs to the present-day Harrier Michel Wibault was an innovative aviation designer and a pioneer obsessed with VTOL.
But his mysterious unknown WW2 “Gyroter” circular craft developed by the Germans still remains virtually unknown.
Had it not been for that S.A. Wibault WW2 circular craft then possibly all of Wilbault’s successive designs for the 1953 “Gyropter”  patent and 1956“Gyroptere” concept might never have happened… and the Harrier might not exist today. It is the only successful combat VTOL aircraft in the world and veteran of the and Gulf Wars.
The world owes a debt of gratitude to Michel Wibault and the German engineers that helped build the his first “Gyroter” under occupation. 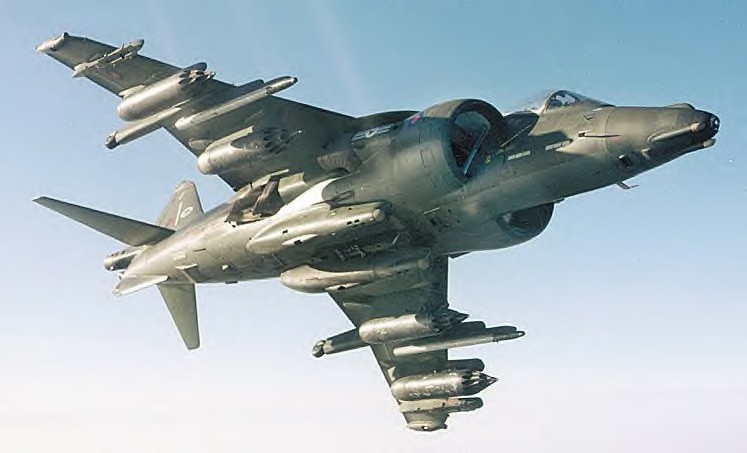