In 1944, Ing. J. Stockel, who was a development engineer working with Dr. Richard Vogt at Blohm & Voss, proposed to the RLM a single seat project for a “Rammschussjäger “ (Ram-Shot Hunter) interceptor that would be powered by a mixed ramjet-rocket.

It was to be of simple construction, a cranked-wing aircraft of 7 meters span and 7.2 meters length with twin tail fins, and a bomb shaped fuselage surrounded by a large annular ramjet inlet just aft of the cockpit. The liquid fuel rocket units numbered four and were to be housed inside the ramjet duct. This configuration effectively made the Rammschussjäger a manned “flying bullet” surrounded by a circular ramjet/rocket!

For ramming attack the nose bullet contained 220 kg (441 lbs) of explosives and when it struck the target both the aircraft and pilot would be sacrificed.

But the entire “Totrammjäger” (Suicide Ram Hunter) program was still not a favorable idea in the Reich, so Stockel redesigned the Rammschussjager to have the nose section fired at the target before the pilot was ejected downwards to safety. This operation would be performed through the use of a Mistel combination to launch the attack. The total Rammschussjäger engine thrust of 22,046 lb would speed the interceptor to 621 mph theoretically.

Stockel went through 5 different proposals but none were accepted even though the aircraft could also be launched vertically as a point defense interceptor. Eventually that fell to the Ba-349 Natter which never became operation just like the suicide Reichenberg IV piloted V-1 craft. Stockel even went as far as to have the entire cockpit section detach after firing , ditching the wings and saved by parachute while the ramjet/rocket also deployed its own parachute for recovery and re-use 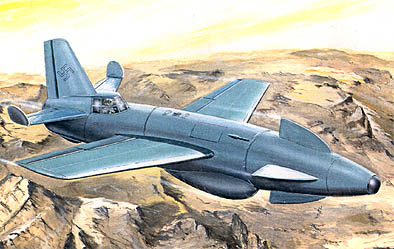