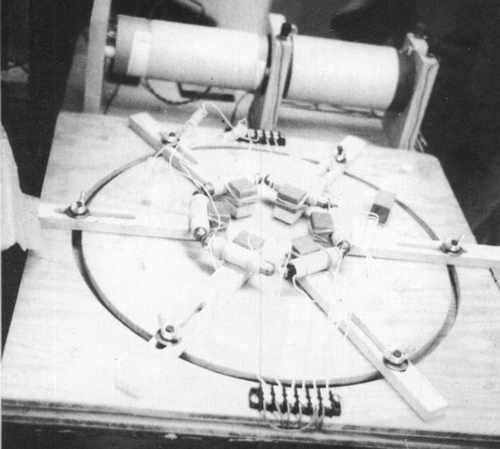 Entitled "The Invention of Hans Coler, Relating to an Alleged New Source ol Power," B.I.O.S. Final Report no 1043, Item No. 31, Summer 1946, this report consisted of tests and findings on two strange circuits conducted at the University of Berlin between the World Wars under the auspices of none other than Dr. Winfried Otto Schumann, discoverer of the Schumann resonance of the earth. A mere glance will explain why the device attracted the immediate attention of the German Navy, which classified it as a possible source of quiet and limitless energy for submarine propulsion.

It will be noted that this hexagonal construction of coils and magnets and two "rotating" sub-circuits has absolutely no source of power. Yet, to the mystified Coler and Dr. Schumann, it nevertheless managed to produce, or better, transduce power seemingly... from nowhere.

Little is known how much farther the Germans took this device, or for that matter, how far the British took it for the two decades and a half after the war that they had to work on it until its declassification. What is unusual is that Dr. Schumann was involved with secret German research on "batteries" as late as 1943, and was subsequently brought to the United State as part of Operation Paperclip. It was this same Dr. Schumann who had noted in 1926 that Hans Coler's device exhibited "no fault, hoax, or fraud on the part of its inventor." Such "free energy" devices seemed to have come very early to the attention of the leadership of the Third Reich - witness the meeting between Hitler, Planck, and Schauberger - and more especially to the attentions of the SS. Devices involving pulsed Tesla coils, suspiciously similar to Tesla's own "Impulse Magnifying Transformer" were constructed. 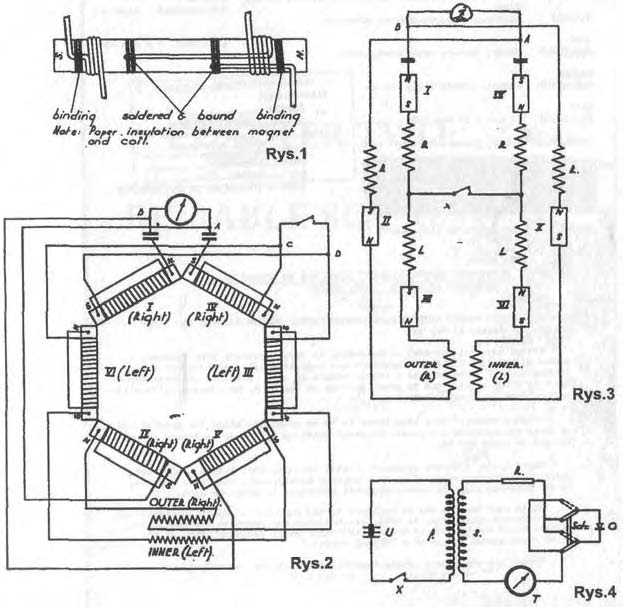 One such device, the so-called Karl Schappeller Device, bears close scrutiny, since it bears resemblances to another device found by Nick Cook and described in his book Hunt for Zero Point. This odd device is described by Henry Stevens as follows:

The Schappeller device is really composed of two separate units, the rotor and the stator. The stator is constructed as follows: its surface is round or ball-shaped, being composed of two half-shells of steel. These half-shells contain the internal structure and are air tight. Attached at each "pole" of each half-shell is an iron bar magnet, most of whose structure is internal. This means that the bulk of the magnet is inside the steel ball, one opposite the other. There is a space between the two bar magnets at the very center of the sphere.

Insulation, a ceramic material, is placed on the inside of the steel ball leaving a hollow central area. Within this hollow area and around the space between the magnets are wound two internal coils. These originate at the bar magnet poles and each terminate at the center of the sphere with a connection leading out of the sphere to the rotor. These coils are composed of a hollow copper tube filled with a special and secret substance called the "electret". Upon leaving the sphere the electret filled copper tubes are replaced by conventional copper wire.

While Coler's Magnetstromapparat did not give the Kriegsmarine a gravitic "free energy" battery for their U-boats, the SS Technical Branch E-IV took the design and turned it into a Konverter for the Haunebu series of disc aircraft which was incorporated along with several Van de Graaf band generators and a Marconi Dynamo filled with mercury, all of which enabled the craft to reduce mass and produce power for the electromagnetic-gravitic Thule Tachyonator 7 Triebwerk.

Construction Detail of the Schappeller Sphere 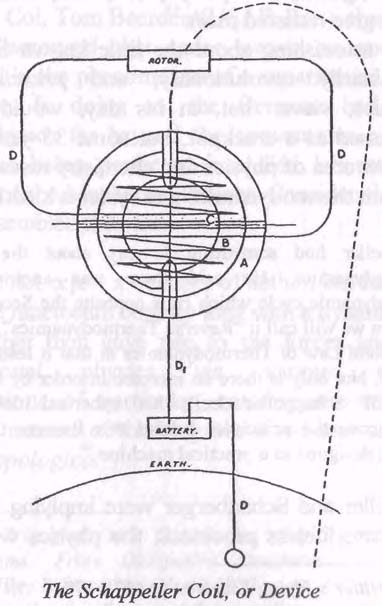 Basically it consists of a pair of coils wound on to a hollow ceramic form, shaped spherically and contained in an iron sphere. The coils are of copper tubing packed with a permanent electret material. This constitutes the dynomagnetic generator.

To convert the energy into mechanical energy, a rotor is used, also made from copper tube packed with electret. The sphere functions only after the electret material is polarized.

Because of the terminology in the Schappeller theory, it is naturally difficult to follow, that is, apart from the strangeness of the concepts. After several readings, one might conclude that "glowing magnetism" or ether precipitation starts if the electric and/or the magnetic fields reach enormous values at a given point. It seems that this is the function of the stator device outlined above.

The arrangement of the fields must be such that A REDUCTION IN THE DENSITY of the ether occurs which continues under its OWN INERTIA.

The resultant compression then causes the production of energy which appears as (radiaton and) magnetism. By this process it would seem that an oscillatory state is set up. This may be so and the FREQUENCY RELATED to the size of the glowing core.

One might expect some sort of longitudinal ether wave to be set up which would be entirely different to the transverse waves of electromagnetic radiation. The wave would cause variations in the ether density which would mean that matter would tend to occupy regions of maximum density in the wave and that the velocity of light would vary slightly between maxima and minima.

In the case of the earth, the Van Allen belts could be taken as an indication of such gravity waves, and for the sun, the obvious fact that the planets occupy orbits that are HARMONICALLY RELATED.

In both cases a standing wave is indicated. (see Pawlicki in "How to Build a Flying Saucer") It might be worthwhile research to look for variations in the velocity of light in the Van Allen belts.

Lodge deals with the problem of inertia by attributing the property to the ether itself. Matter, he claims, has no inertia as such, but acquires an induction as it moves through the space fabric, or more correctly, the space fabric moves THROUGH IT.

The induction constitutes a change of energy seen as kinetic energy, and the state of motion lasts as long as the induction lasts.

The theory also asserts that the ether itself has an enormous inertia and is IN A PREFERRED STATE OF REST. Small movements give rise to big effects, for example as in gravitational fields. However, cellular vortices which circulate at the speed of light might be extended to larger fluxes. The conclusion to this is that matter accelerated by force fields cannot exceed the speed of light and the approach to it would be exponential.