The little-known Lippisch P.13B is one of the most controversial aircraft of the Second World War - not due to any special paper project design discovered apart from the others, but due to the fact that the United States has deliberately kept classified documents (that may prove that THIS aircraft was actually built in 1945 and was the first to break the sound barrier) hidden. But first, a brief summary of its history.

The aircraft was to be an interceptor capable of speeds up to Mach 2.6. It featured a 60 degree wing-sweep, a cockpit buried in the large vertical tailfin, and would utilize a rocket booster to get the ramjet into operation. Since conventional aviation fuel was in short supply, the concept of using coal-dust for propulsion was accepted as practical.

Lippisch based much of his concept for the P.13A on his work on the experimental DM-1 glider.

The P.13B was the next-generation design from the P.13A and was to be a ramjet fighter as well. Designed in late 1944, it also was a delta configuration of 60 degrees wing-sweep, but with turned-down wingtips. Changes to this design resulted in the cockpit being moved to a conventional forward position and double tailfins instead of one vertical tail. On each side of the cockpit on the wing's leading edge were long air intakes to feed the ramjet.

Because of the acute fuel shortage in Nazi Germany in the last months of the war (including synthetics), an eccentric plan to use coal (or paraffin coated lignite dust) for fuel was to be attempted (probably the result of Dr. Mario Zippermeyer‘s extensive coal dust research as both a fuel and as a weapon). A centrally located round or hexagonal heat-resistant ceramic combustion chamber was to be fitted in the interior of the wing.

The main landing gear was a retractable landing skid, with the fuselage resting on the reinforced turned-down wingtips. No armament was planned in the initial stage of development, but 2-4 30mm MK-108s would have been appropriate for the timeframe and role as interceptor.

It would appear that this is where the traditional story ends, and that no P.13B was ever constructed, let alone flown to Mach 1 or higher.

But declassified evidence has surfaced from the United States and Poland that suggests otherwise.

Assuming that the original intelligence reports are honest, the original evidence is contained in these four primary references:

...Professor Lippisch designed an aircraft resembling a bird's wing with ramjet propulsion. The prototype had to be modified continuously. The flying wing was to have a basic speed of 2500 km/hr....to enable the aircraft to reach an adequate speed necessary to start the ramjet, solid propellant rockets were used....the speed was realized by the use of ATO rockets, the airflow heating the coal for more thrust. The hot gases flowed out through the narrow nozzles at the trailing edge. This solution enabled the thrust to be maintained for 45 minutes. In the final months of the war the propulsion effectiveness was doubled by injection of liquid fuel above the coal.....

The last sentence means that the aircraft flew.

The Lippisch P-13B was described in detail by the American analysts. Their drawings show little difference to the trapezoid version, also illustrated. Since the report mentioned at least two similar versions, it can be assumed that the differences are minor.

In the American reports it was stated that the assembly was realized by various facilities of the LFW (Luftfahrtforschung Wien):

The above means that the aircraft proceeded beyond the wind-tunnel and was actually constructed.

The American reports provide information about the fuel (described).

The American source of information was then cut off in early January 1945 when the prototype P-13B was ready for its first flight. Due to the fact that the Germans expected to achieve the magic speed of 2440 km/hr, the Americans stated that there were many volunteers to make these historic flights.

WHY HAS THE UNITED STATES CONCEALED THE FURTHER PROGRESS OF THE LIPPISCH P-13B AFTER JANUARY 1945?

Fortunately, the "gap" in the American documentation is filled by the 1951 Polish secret publication listed above as Reference 1 (which is considered the best analysis on German rocket weaponry published thus far).

Take-off of the flying wing used ATO rockets from an oblique launcher...(describes device)...the thrust depended only on the temperature in the combustion chamber and aircraft speed....during the last months before the capitulation, it passed all its comprehensive trials. To double endurance, liquid paraffin was injected into the coals.

Either all this is Polish imagination, and the documents are falsified, or we have been deliberately deceived by the US authorities upon which we rely upon for historical accuracy.

I support the latter belief.

The Freedom of Information Act (FOIA) in the United States exists so that investigators may discover "missing" areas of documentation "accidentally overlooked" by US agencies, which in this case would include the last four months of P-13B trials before the capitulation. 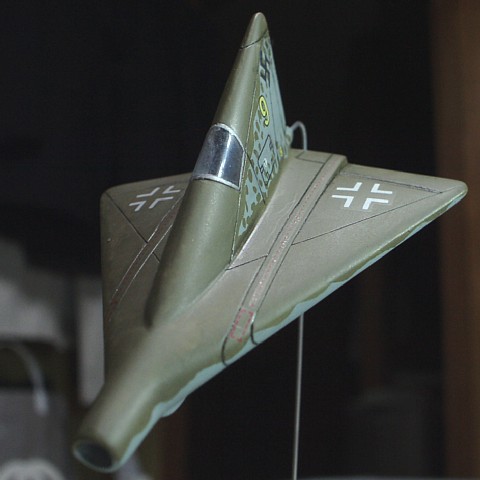